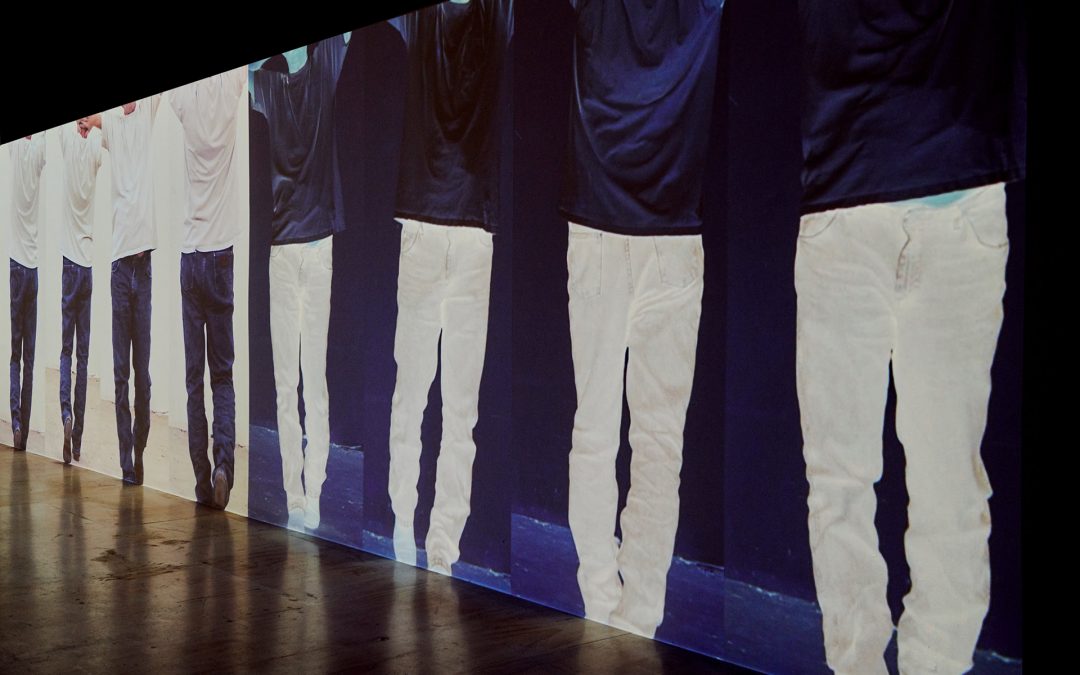 Bruce Nauman Reappears: Pay Attention, lets us see with clarity where the artist stands and why he is pertinent to our wrenching moment.

If art isn’t about life and death, and the emotions and ethics that surround them, what is it about? Style? Taste? Auction results? Some artists focus on those, but the most interesting head for the uncool existential bottom line, which is what Bruce Nauman does. He’s approached this line by many paths: history, humor, shock, politics and formal variety. And he’s merged those paths into a bumpy superhighway of a career, which we’re invited to travel in “Bruce Nauman: Disappearing Acts,” a half-century retrospective that fills the sixth floor of the Museum of Modern Art and nearly the entire premises of MoMA PS1 in Long Island City, Queens.

It’s a transfixing trip. Now 76, and still on the job (there’s work from this year in the survey), Mr. Nauman has done much to change the way we define what art is, and what is art. Without being overtly topical, he has consistently viewed the world through a critical eye, with the result that art he made decades ago is pertinent to our present morally wrenching American moment. And even his loudest, most outsized art feels personal, sourced from extreme emotions we all feel — panic, despair, disgust, hilarity — one by one.

The retrospective is Mr. Nauman’s second at MoMA — the first, which originated elsewhere, arrived in 1995 — though it’s far from being a repeat. The earlier survey was, among other things, a punishing aural assault. The noise level made you want to hustle through it. The new one feels, if only by contrast, subdued. You still get high-decibel discomfort. The gallery guards at MoMA should be awarded combat pay. But at PS1, the soundscape is actually mellow. You hear someone pick out a spare piano tune. A guitar plays a mournful country song. And in a 1966 video, in the entrance lobby, a youthful Mr. Nauman scrapes away, not unmelodically, on a violin.

The excellent curators — Kathy Halbreich, the lead organizer of the exhibition (andco-curator of the earlier retrospective), with Heidi Naef and Isabel Friedli of the Schaulager Basel, and Magnus Schaefer and Taylor Walsh of MoMA — have seen to it that you get a chronological overview of Mr. Nauman’s art at either venue, but I strongly urge you to visit both.

The two installations look intriguingly unalike. MoMA’s is, as usual, wide-open, white, light-blasted and sealed off from any hint of an outside world. At PS1, the work occupies a three-floor warren of hallways and tight, low-lit enclosures. Many were once classrooms of a public school — a damp air of adolescent angst still clings to them — and are probably about the size of Mr. Nauman’s starter studios.

But the big reason to take in both sites is that Mr. Nauman deserves to be seen in full.

When you talk about life and death you’re talking about the body, present or absent. And the body — his, ours — has been the primary focus of Mr. Nauman’s work from the start. I don’t know how this focus developed but by time he enrolled in the M.F.A. studio program at the University of California at Davis in 1964, it was there. He spent his first year doing abstract painting, then dropped that for good. He moved on to sculpture, and that seemed to turn on a switch, point the way.

Minimalism was the hot style then, but he found its industrial blankness pretentious and turned to making smallish, rough, gnarly things, that referred to the body, or parts of it. Often, that body was, at least nominally his own, as is the case in nearly half of the 21 sculptures and drawings, all from the 1960s, in the first gallery at MoMA.

The gallery looks a little like the aftermath of an autopsy, with the discarded scraps waiting for cleanup. A wax cast, gangrenous green, of an arm and shoulder, severed just above the chin, hangs on the wall. (Its title, “From Hand to Mouth,” introduces Mr. Nauman’s penchant for visual-verbal puns.) What look like large strips of raw fat lie on the floor. Another wall sculpture, “Neon Templates of the Left Half of My Body Taken at Ten-Inch Intervals,” is an unprepossessing network of weakly glowing light tubes and sagging writing.

Video — new to art, cheap to produce, easy to show — became a primary medium for Mr. Nauman and with it he continued, for a while, to be his own most malleable subject. In a piece called “Art Make-Up: No. 1 White, No. 2 Pink, No. 3 Green, No. 4 Black,” he smears his face and bare chest with layers of colored pigment. He’s turning himself into a living painting, but he also seems to be playing with the fictions and stigmas of race at a time — 1967-68 — when America was burning with racial violence.

In another video, “Walk With Contrapposto,” gender gets a workout. For this piece he constructed a tall, narrow, free-standing corridor from wallboard, then filmed himself walking its length with a funny, hip-swinging gait. He was ostensibly imitating the pumped poses associated with the ideal male form in Classical sculpture. But his bump-and-grind sashay brought conventions of female striptease to mind. The crossover — male/female, old/new — had liberating potential, but not when crushed between viselike walls.

Soon after this, around 1970, images of his own body dropped from view. And in certain works, he invited viewers — us — to physically take his place. He presented the corridor of the walking piece as a stand-alone installation, with surveillance cameras added. The piece now became an audience-participation exercise in claustrophobia and paranoia.

Nor did he absent himself entirely. He remained very present in the form of words, spoken and written. And the work got angrier. In a small, darkened gallery at PS1, a male voice — Mr. Nauman’s — alternately hisses and shouts the command: “Get out of this room, get out of my mind.” With neon tubing, he cooked up hellish versions of standard commercial signage. In 1984, he composed a wall from 100 flashing, rainbow-colored variations on the phrase “Live and Die.” A year later came a neon animation, called “Sex and Death by Murder and Suicide,” in which two silhouetted nude figures, male and female, stab and shoot themselves and each other.

And when he returned to video, the aggression continued. In the 1987 video installation “Clown Torture,” the clown of the title (played by an actor) cowers and ceaselessly screams a horrified “no, no, no, no, no” at an unseen tormentor, who is apparently us, the viewer.

There’s a distinctly comic, crazy-town edge to all of this. But it’s hard to find that edge in certain other works. This is true in late-1980s sculptures like “Carousel (Stainless Steel Version),” which consists of a mechanically rotating metal rack hung with life-size polyurethane forms of dead animals — deer, fox, coyotes — native to the American Southwest, where Mr. Nauman has lived, on his own horse ranch, since 1979.

The image of Mr. Nauman as a cowboy was in wide circulation by the time of the 1995 retrospective. And for some people it colored the way his art was perceived. It was seen as dude-art, and, as such, evidence that he was just another alpha-male artist taking an institutional victory lap around the arena. The assaultive ambience of the show itself didn’t help.

These reactions, while not baseless, clouded the nature of his art. The new retrospective, less theatrical and more meditative — a substantial selection of works on paper is a big help — lets us see with more clarity where Mr. Nauman’s art, ethically speaking, stands, and how it connects up with politics in the present.

It lets us see Mr. Nauman’s image of hanged and flayed animals (he adapted them from taxidermy models) as prescient of an era when protections of natural resources, including wildlife, are being gutted. A 1981 neon sculpture that spells out “American Violence” in the shape of a swastika suggests that white nationalism is a chronic condition. It says something about Mr. Nauman’s view of art as a moral instrument that when, in 1969, he was invited to be in a major Land Art show, he proposed hiring a plane to sky-write the words “Leave The Land Alone.”

In the seven-channel video installation ‘‘Mapping the Studio II (Fat Chance John Cage),” from 2001, the body, in all its manifestations, is gone. For this monumental work Mr. Nauman set video cameras running in his studio overnight for several nights to record what happens when he wasn’t there. A lot does: distant dogs bark, coyote cubs howl, mice scamper, cats prowl, hunting. The result is a ground-level study in first and last things. And an art-and-life lesson in how to be absent, and not.

The article originally appeared in nytimes.com.